8. POSITION and Plan for Rescue 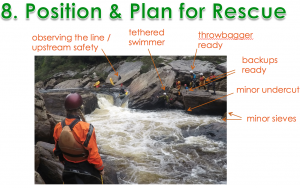 One of the biggest advantages of a packraft is the ability to potentially self-rescue once you have capsized however the success rate of a self-rescue is much lower than that of an assisted rescue. I always aim to set myself and my paddling team up so that we can assist each other in the event of a capsize or for the worst case scenario of dealing with an entrapment.

Although paddling too close to each other can be an issue, particularly for less experienced paddlers, it is extremely difficult to help each other if you are too spread out on a river. In this situation you are essentially paddling solo which is not a good idea. My philosophy is to paddle as a team and always back each other up. This is done by front team members constantly catching eddies to look out for those at the back of the group. Think carefully before moving downstream onto the next rapid if the previous rapid has not been successfully cleared by everyone in the group. Often once you go over a drop it is impossible to get back upstream and help someone so don’t commit to moving downstream until everyone is safe or is protected by someone else.

When someone swims, waiting that extra few seconds to have someone in another boat assist in stabilizing the packraft makes a significant difference and is much more likely to produce success on the first attempt at a re-entry. An assisted rescue also reduces the chance of losing a boat or paddle and of the situation worsening. I see a lot of capsized boaters initially rush to do a self-rescue with the result that they actually make their situation worse. Repeated unsuccessful self-rescue attempts may lead to swimming through large holes or over dangerous drops before either successfully clambering back in, swimming to shore or being rescued. These situations expose the capsized victim to a much longer swim, increased dangers and a higher risk of losing their boat temporarily or even permanently. Sometimes simply hanging onto your boat and aggressively or defensively swimming with it is actually the best option until another paddler can assist you. Waiting seconds for assistance may save you a lot of time and heartache!

For an assisted rescue to be efficient and effective it is vital that other members of the group are being pro-active and positioning themselves where they are likely to be needed. An experienced paddler will constantly be aware of their position relative to others and position themselves at suitable locations to help others. This will often involve them sitting in an eddy, ready to assist, immediately below a challenging section of a rapid. On large volume rivers you may be able to assist each other by running a buddy system where boaters are close enough to support each other in the event of a capsize (for example, perhaps within 10 metres of each other).

Regularly practice both assisted and self-rescues! I often see participants on ‘intermediate’ courses who have never actually tried to get back into their overturned boat in anything but easy conditions with an unloaded boat. This is despite the fact that they have been packrafting for a number of years. Although self-rescues are generally easy in placid conditions with no additional packed gear, it can be a serious struggle in rough conditions or in continuous rapids especially with a heavily load.  Try hard to always hang onto your packraft, as it can be extremely difficult to get hold of it again without assistance.  My aim is to always hang onto the thigh straps of my overturned packraft, even before I wet-exit it.

A significant advantage of packrafts is that you can often have a paddler walk around a challenging river feature and position themselves below for safety, ready to assist with a rescue. With a heavy kayak you would rarely do this because it is too much hassle but in a packraft it is relatively easy.

For whitewater kayakers throw-ropes are a must-have rescue item yet I see many packrafters without them. Personally I am a big fan of having one clipped around my waist, where it is immediately accessible all the time. I never paddle on whitewater without one. Check out Hyperlite’s sexy new River Rescue Throw Bag. Others prefer to have theirs boat mounted however too often I hear even experienced paddlers say “I’ll just unclip it and carry it with me when I scout”. In my experience though they often don’t do this and so now and then get caught short. Running back to your boat to grab your throw-rope is not ideal when time in a rescue is critical. Every time you get out of your boat to scout a rapid take your rope with you and work out where it could best be used as a safety advantage. It is important though to note that ropes are not a miracle rescue device and they require training and regular practice and that sometimes they will actually make a situation a lot more dangerous. Don’t forget to carry an accessible river rescue knife whenever you carry a rope!