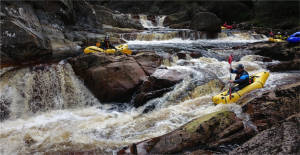 When paddling whitewater there is generally safety in numbers. Be smart and paddle with an appropriately sized group for the environment you intend to packraft. Whitewater kayakers know from experience that when things go wrong the outcome is often determined by the team that you have around you.

Don’t use the excuse that no one else was available to join you in order to justify paddling solo. Whilst some individual packrafters are happy to carefully consider and then accept the high risk of going solo, when it comes to serious whitewater it is generally much safer to be a part of an experienced team of four to five people. Significantly larger groups can also be problematic depending on the type of river environment. Whilst paddling in a group of two leaves very little margin for error should something go wrong.

From my perspective a team of two often gives a false sense of security as during a serious rescue situation one responder may not be enough. There are numerous examples of incidents where both paddlers have found themselves in trouble at the same time with neither able to help the other. Probably the best-documented case of this is the ‘Wood River Packrafting Expedition’ which blew out from an expected 5 days to actually taking 11 days. And there are lots of other similar stories out there.